ANNOUNCING THE WINNER OF "KILL A COLLEAGUE" 2014.

Veronica Clevidence is the winner of the January, 2014 contest and the name she submitted will be used in Storm Vengeance. Veronica submitted her daughter, Rhiannon's name. After I contacted her I learned she had three daughters and wished she could kill them all (or at least see their names in a book). I decided, what the heck. I'm using all three of their names. So be on the lookout for the appearance of Rhiannon, Aislynn and Tristan, and maybe even Mom! 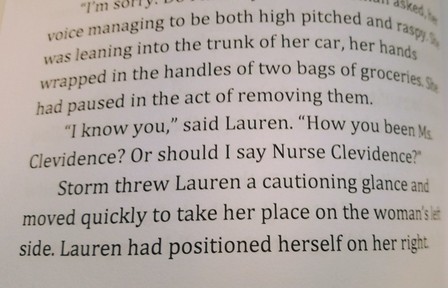 The 2014 winner posted this (below) along with a picture from a page of Storm Vengeance, on Facebook. I had to share.

​"For all those Clevidence-types out there, (or just people who appreciate a good, creepy novel), check out Pamela Cowan's novel Storm Vengeance. This happens to be my middle daughter (in name only),Aislynn Olivia Clevidence-Moore, but Tristan Clevidence and Rhiannon Alexa Clevidence-Moore make appearances as well, as do I. It's nice to know the author!"
"KILL A COLLEAGUE"
On hold for the moment. Hope to announce a new contest in 2018.

Someone in your life really bugging you lately? Got that boss that just makes you grit your teeth? A colleague whose voice drones through your brain like a swarm of bees? How about a friend or loved one who you aren't angry with but would like to see their name in a book--even dead? Well you blood-thirsty monster, you've come to the right place.

To win a chance to "Kill a Colleague" fill out the form below, provide your contact information and the name of the person you'd like to see dead (on paper) and hit that submit button. Want more chances to win? Get your friends to fill out and submit a form naming the same person.

They'll get my newsletter 4 x a year with an opt out any time they want. You'll get a chance to see your best friend, or worst enemy killed in the next book I write! You'll also win two signed copies of the book, one for you and one for your victim.

I do not wish to represent a living person so no descriptions please. Also, the plot will determine the manner of death, not you and not I. No really, those plots have a mind of their own!